A-Level students at South Hampstead High School have been celebrating their results this morning, following the return of public exams after a two-year hiatus. 54.4% of all grades were A*s, 80.7% were A*/As, and over two-thirds of students achieved a clean sweep of A*/A grades this year. 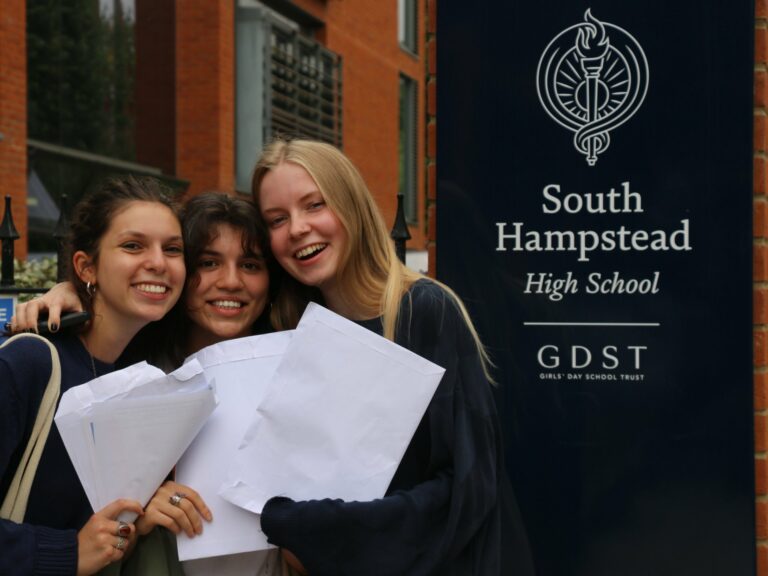 Bursary student Ailin is one of 17 South Hampstead pupils who gained four A*/A grades. Ailin joined South Hampstead High School for the Sixth Form during the pandemic on a fully-funded place. She gained top grades in Computer Science, Maths, Further Maths and Physics to secure her place to read Computer Science at Christ Church, Oxford.

“I have experienced nothing but amazing support during my time at South Hampstead, not only from the teachers and the Sixth Form team but also my peers. From beginning to end, I have had a great time and I would recommend anyone to apply regardless of financial background – it has given me such a strong foundation for the future.” – Bursary student Ailin

70% of South Hampstead students got at least 3 A* or A grades this year, and over a third were awarded at least 3 A* grades. Izzy, with straight A*s in Economics, Geography and German, is one of several students who is going abroad to continue her studies; she is off to Leiden University in the Netherlands to study International Relations & Organisations. Other international destinations this year include US Ivy League college, Cornell; McGill in Canada; and the University of Madrid.

Izzy commented: “South Hampstead has played a huge role in shaping me to be the person I have become. That’s down to the school’s atmosphere and the teachers – I’ve also made friends for life. The results I have achieved are not just a reflection of my own work, but the relentless enthusiasm and motivation the teachers project and the ongoing support they have provided over the years. I’ll be forever grateful.”

Head Mrs Bingham praised the incredible hard work and resilience of the Class of 2022: “It’s been a turbulent few years for students up and down the country; they have faced considerable uncertainty about exams, endured two lockdowns, and there have been four national grading standards in as many years… I’m very proud of how our students have handled each twist and turn with such stoicism. I am delighted to see them go on to pursue their passions in such a diverse range of fields – from Engineering and Economics, to Geography and Graphic Design. I’ve no doubt they will go on to achieve great things as the thinkers and leaders of tomorrow.”