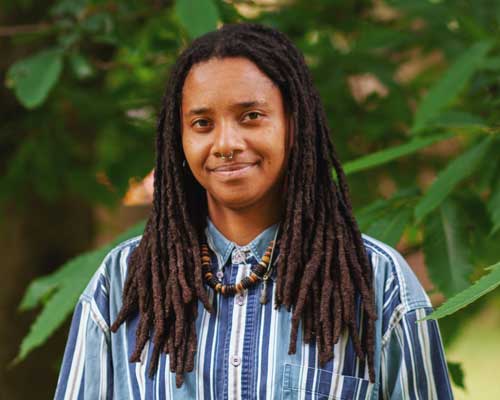 Nneka attended The Belvedere School on a full scholarship through the Sutton Trust’s Open Access Scheme.  A local student, they were involved in every aspect of student life.  Nneka was not only a straight A student but an extremely talented all-rounder representing the school on a range of sports teams.  Nneka displayed a clear passion for music and received instrumental lessons on both the violin and the tenor saxophone. Nneka enjoyed playing music with other students and played in the orchestra folk string group and jazz band (which they were a founding member) but they also took centre stage on their violin in numerous concerts. Nneka also held the prestigious position of Deputy Head Girl* during Sixth Form and still found the time to play in the Liverpool Youth Orchestra and also had a year in the Liverpool Philharmonic Orchestra. In 2010, they won a writing competition sponsored by the Liverpool Athenaeum and was writer in residence for a year.

After gaining straight A’s in their A Levels, Nneka obtained a first class law degree from the University of Durham and secured their first job at a silver circle law firm in London commencing March 2017, following a successful vacation scheme in 2014. Alongside their high flying career, Nneka still pursued their interest in music and took short courses in mixing and mastering at Morley College and film scoring at Goldsmiths. Through networking, they found entry points in the market to build their skills such as collaborating with indie producers and directors on short films and with aspiring singer/songwriters. In 2020, they successfully gained a place at Trinity Laban Conservatoire of Music and Dance to study composition at Masters level and was awarded the Gareth Neame Scholarship and the Trinity College London Scholarship.  You can listen to one of Nneka’s tracks:

Nneka is passionate about learning new skills and pushing on doors for opportunities. On reflection of their own journey, they said:

Nneka will be working with our students who hope to pursue careers in law or music.

*Nneka identifies as non-binary and uses they/them pronouns but wanted to use the title of the award that they received at the time.