The winner of this year’s GDST Trailblazer of the Year award is Shrewsbury High School alumna Amy Williams, co-founder and CEO of the ethical advertising agency, Good-Loop. With a commitment to making an impact, Amy has revolutionised the way businesses advertise and is continuing to help some of the world’s biggest businesses make a positive social impact. 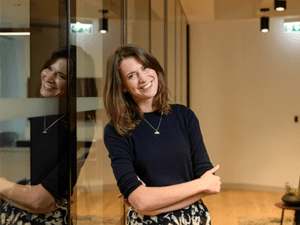 Amy co-founded Good-Loop in 2016 after stints at advertising giant Ogilvy London, and a soup-kitchen in Argentina, to make ethical behaviour easier for consumers and more profitable for companies. Amy is one of Forbes Europe’s 30 under 30, and a face of the United Nations #SheInnovates global campaign.

We spoke to Amy over Zoom at the end of last year, when she was in Chicago, coming to the end of a US trip meeting with customers face-to-face for the first time in 18 months.

Tell me about Good-Loop. How does it work?

“We are a purpose-powered advertising platform. What that means is that we work with global advertisers like Coca Cola, McDonald’s, Nike and Adidas and we take their existing creative – their ads that they might already be running on TV or YouTube – and we wrap those ads in our unique interactive format and then we run them across publishers like The New York Times, The Guardian and USA Today. If you see the ad you are given a choice, and this is quite fundamental to the Good-Loop ethos. There is always a choice, you will never be forced to watch. There’s always skip button, but if you choose to pause and you give that advertiser a little bit of your precious time and attention, then you unlock a free donation funded by the brand and you get to choose which charity you would like to give that donation to.”

“I think responsible business is how we shape our world to be better.”

What gave you the idea?

“I’ve always worked in advertising, and I was seeing a lot of brands starting to layer social purpose and social good into their marketing. I remember Unilever conducted a study looking at their various brands in their portfolio and they found that when their brand had a social purpose or some form of social impact at the heart of what they stood for, that brand grew 50% faster than the rest of the portfolio. What that essentially means is that when Unilever decide to champion real women, they also sell more soap.

“Fast forward six or seven years and rather than being a competitive advantage, it’s become an absolute requirement. Everybody else needs to have some form of responsibility. Both environmental responsibility as well as a really genuine approach to being diverse and inclusive, championing equality and social mobility and protecting community.”

So at the beginning, was it just you and your laptop?

“At the start I was still working full time and doing this on the side. I’d created some PowerPoint slides that summarized the idea, and I was literally taking them to anyone that would listen. I got a sense that I was more excited about the side conversations, then I was about my day job and I just felt like it was the moment to plunge so I quit my job and I went into an entrepreneurship programme for female founders in Chile. It was eighteen other women, all of whom wanted to start a business and we spent three months living together and working 12 hour days pitching and building financial decks, building models and doing minimum viable products and market analysis and coding.”

What’s the big difference between working for a huge global organisation and starting up on your own?

“The speed and the feedback loops. In the big organisations, it’s so hard to feel like your behaviour has an impact because everything takes so long and everything moves at such incremental rates. You could work your backside off on something for hours or days and then at the end of it not feel like anything meaningfully changed.

“Whereas when you run your own startup, every single decision you make has an immediate visible impact on your experience in that moment. At every point I am met with a decision and as soon as that decision is made, the course of my day, let alone my life, will change, so it’s a constant feedback loop, which is so great for learning.”

Is the idea of responsible business still the thing that gets you up in the morning?

“I think responsible business is how we shape our world to be better. I see the fallout from COP26 and the shirking of responsibility that the global politicians seem to adopt and what gives me hope is the strength and the influence that huge corporations have and the impetus that there is there for change. The global corporations have such a huge role to play in shaping our society and where we can prove to them that they can make more money by being responsible then we can make such seismic shift happen.”

Do you ever say no to brands who want to work with you?

“We often have to consider when we’re briefed to work on a brand if that brand is authentically making change happen, if they actually are putting their money where their mouth is.

“It’s a real reputational risk for Good-Loop if we end up helping or facilitating a brand that wants to greenwash, or cover up, perhaps unsavory behaviours so we are constantly interrogating the brands. There are certain categories we won’t support. Good-Loop won’t run advertising for anything that increases the consumption of fossil fuels, for example. It has meant we’ve turned down some serious business, but it means that we also have integrity and authority which creates equity for the Good-Loop brand. So that’s been a big factor.”

How did your time at a GDST school prepare you to be an entrepreneur?

“I’ve had to realize that other people see me as a female entrepreneur because it’s just not something I see myself. I can remember the first time it happened: six months into starting the business I contacted the technology journalist at the BBC and pitched him a story about my idea. I thought it was going be an article about entrepreneurs driving social impact and the headline read Female Entrepreneurs Driving Social Impact and just the addition of the word ‘female’ really threw me.

“Now, I get asked a lot, ‘What’s it like being a female founder?’ I’d never put that label on myself and it’s because I went to an all-girl school so my gender was never part of how I identified myself. The best person in school at Maths was a girl; the best person in Physics was a girl; and the best person in Art was a girl. There was no gendered opinion on what girls should and shouldn’t be doing and I’ve never ever doubted that I could do whatever I wanted.

“And it’s only when I’ve met people that don’t have that kind of education that I realize how unusual that is, and just being told you have the right to reach as far as you possibly can is such a gift to give a young woman.”

What would you suggest to anyone who think they may have an idea that could reshape the world around us?

“Just start talking to people about it; start saying it out loud. I booked a coffee with every person that would take the meeting. And every single meeting you have end with ‘Who else should I speak to? Is there one more person you’d recommend?’

“The network is the founder’s most valuable weapon, and the way you build it is by just asking that question at the end of every meeting. It’s the Kevin Bacon effect. You had five coffees and you’re chatting with Kevin Bacon. So you never know who you’re going to meet!”