By Cheryl Giovannoni, CEO of the Girls’ Day School Trust

As the COP27 climate summit draws to a close in Egypt, I reflected on the interesting soundbites from Greta Thunberg’s UK media tour for her new book, The Climate Book, most notably her confirmation that she declined an invitation to attend COP27 due to ‘greenwashing concerns’.

However, it was the social media response to her interview on BBC’s The One Show that caught my eye. The 19 year old’s appearance reportedly enraged viewers of the fairly tame family show, with some threatening to switch off. In fairness, others lauded her activism and predicted that “we will look back and see she was 100% correct to do what she does”.

The fact that one of the most famous female role models for sustainability spawns such a visceral reaction, whilst the daily reality of climate change rages across the world is both saddening and infuriating. This young woman has done more than anyone I can think of to drive the environmental agenda in recent years. Ahead of last year’s summit, a COP26 spokesperson stated that women and girls have a critical role to play in the fight against the climate crisis – as decision-makers, educators and advocates at all levels, but admitted that there is more to be done.

The paradox of this statement is that most of the current role models in the sustainability space are women, and notably women from the global south or marginalised communities such as Vanessa Nakate, Autumn Peltier and Leah Thomas. Young people who are interested in sustainability tend to know about and admire these women. They, alongside Greta, are often credited with inspiring a new generation of young ‘eco-feminists’ to start taking action for the environment in their everyday lives. Although there is arguably room to raise awareness of these women in the mainstream, they have embraced the challenge of acting as sustainability role models for women across the world.

The climate crisis is not ‘gender neutral’ – women and girls are disproportionately affected compared to men. But the unwelcome truth is that it is a lack of representation for women in environmental decision-making, and not an absence of female role models that is stalling progress on climate action. A report by the UN General Secretary revealed that countries with more women in parliament, and with more women involved in managing local natural resources often result in the adoption of stricter national climate change policies resulting in lower emissions. And this tends to lead to more equitable and inclusive local resource governance and better local conservation outcomes.

Meanwhile, in business, a recent LinkedIn study on global green skills found that in 2021, there were 62 women for every 100 men considered green talent, no improvement from 2015 figures.  The share of female green talent has grown since 2015, but it still lags behind male green talent. Over the last six years, 66 percent of transitions into green jobs have been made by men.

We know of course that we need more women in the boardroom, but where are our female corporate sustainability leaders? Where is our advocacy, day by day, to underline to girls, and to society as whole – and not to undermine – the vital role women play in safeguarding the future of our planet? One Gender Day at COP every year – a place for sustainability professionals already ‘in the door’ – cannot by itself trickle down to girls in schools across the world.

We can, and must, take action to address this gap: to put in place female leaders who can take credible action on sustainability, and to support them in their efforts. As educators, parents, and mentors, we can encourage girls in their interest in science and tech. We can help them understand that the lessons they enjoy can be nurtured into critical expertise to combat climate change.  We know from what girls tell us that they genuinely believe that they have a chance of making a difference. Every day at our schools we see evidence of, not only this belief, but change in action: whether it is a Year One girl organising a litter picking committee or a group of friends from Year 12 starting a social enterprise to upcycle old clothes. They want to lead the way, like Greta, giving me real hope that our future can be placed in great hands.  They have the passion, so we must give them the power. 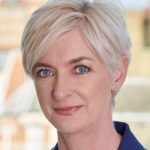