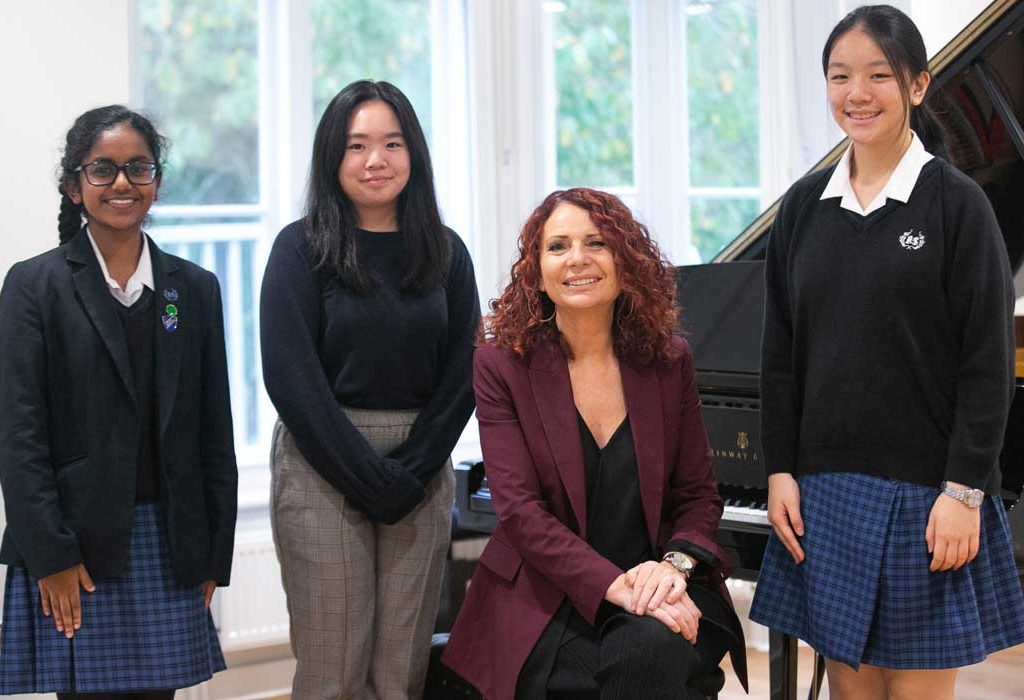 South Hampstead High and Royal High School Bath were delighted to welcome Joanna MacGregor CBE, the professional pianist and alumna of South Hampstead, for a range of masterclasses, concerts and more this term.

South Hampstead High welcomed back the class of 1977 to see their school friend, Joanna MacGregor CBE, perform at their Towards 150 Concert on 5th October 2021.

Each year, South Hampstead  hosts a concert to thank everyone who has supported the school over the past year, as they look towards their 150th anniversary in 2026. At the concert in Waterlow Hall, Joanna performed a selection of classical and jazz pieces, from Bach, Chopin, Piazzolla and Liszt. She introduced each piece before playing, sharing more about the composer, their history and motivations for composing a particular tango, sonata or allegretto.  Her hour-long performance ended with non-stop applause, and an encore which was her own rousing re-arrangement of ‘Good Bait’, a Jazz trio piece written by Nina Simone.

Joanna is one of the world’s most innovative musicians, with a distinguished pedigree as a concert pianist, curator and conductor. Her performing, recording and broadcasting credits span the globe and South Hampstead felt very privileged that Joanna found time in her very busy schedule to return to her old school. Earlier in the day, Joanna met three of the school’s talented music scholars and gave them a masterclass – a wonderful experience to be taught by the Head of Piano from the Royal Academy of Music.

A former South Hampstead bursary pupil herself, Joanna generously donated all proceeds from the concert to the school’s bursary funds.

The visit began with a thought-provoking and inspirational talk to the piano students about a range of composers and how historical composers’ ideas in music might be being written or interpreted now. For example, a lot of concepts in jazz can be linked to Bach’s music. She also shared careers advice for the school’s musicians and emphasised the importance of building a portfolio career when pursuing music. Being a performer is not enough; a musician should be a composer, conductor, teacher and curator, as well as having hobbies and interests elsewhere.

Three music scholars were also treated to a masterclass with Joanna, and in the evening, she thrilled students and staff by closing out a recital with three pieces; Bach’s French Suite No.5 in G Major, Chopin’s Four Mazurkas and Danzas Argentinas by Alberto Ginastera.

Speaking about the day, Megan, one of the music scholars and masterclass participant said, “Today was a really exciting day as a music scholar! I have never done a piano masterclass before, and I was nervous but that quickly subsided. Joanna MacGregor was so friendly and a wonderful teacher – I learned so much in the masterclass session. I learnt about the style of a Nocturne, and how to play it well. Hearing her play in the evening was something I will never, ever forget.”