Girls officially overtook boys in maths last summer, capturing, nationally, more top grades in the subject than boys at both GCSE and A Level. We spoke to three GDST mathematicians, to get a sense of the significance of this, and what the future holds for girls who love maths. 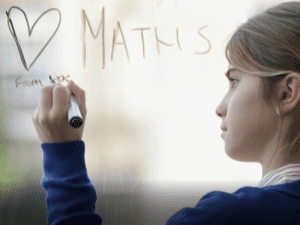 Before looking forward, it’s important to understand just how much the study and pursuit of maths have changed over the past 50 years – thanks to the crusading female academics who over the past 50 years have carved out a place for women in a previously very male-dominated world. Even a shallow dive into it quickly shows a culture that venerated the ideas of ‘youthful brilliance’ and ‘individual genius’, and had developed a system to deliver these prized attributes, like elite maths prizes, intense competition (one female academic described it as “vicious as a boxing match”), post-doctorate research positions often requiring extensive travel and of course, the age-old bias of recruiting in one’s own image. Not quite the level playing field.

Oxford High School alumna, Dame Frances Kirwan DBE FRS, Savilian Chair of Geometry at the University of Oxford and former president of the London Mathematical Society (LMS), talks of the “leaky pipeline”, and believes that the competitiveness in maths has put off girls and women in the past. “Many people get satisfaction from just solving problems, but others like the feeling that they are doing it better than other people, too,” she says.

Today, at the University of Oxford, women represent around 30% of undergraduates but, says Frances, “The numbers start to go down as you go up the ranks. I think the number of women in our department is similar today to what it was 40 years ago whereas the total number of faculty has increased, which is very disappointing.” But, she adds, “Other maths departments had far fewer women 40 years ago and have more now, so the overall picture in the UK is improving – though not fast enough.”

“Employers want to see people who like a challenge, can break down a problem and work it through, can grasp abstract ideas and convey complex ideas in simple language.”

Professor Caroline Series FRS, also an alumna of Oxford High School, Emeritus Professor at University of Warwick, and also a past president of the LMS describes a similar picture. As a founder member of European Women in Mathematics and the first vice-chair of the International Mathematic Union’s Committee for Women in Mathematics, she has a wealth of data to hand. According to her paper, The LMS Committee for Women and Mathematics – A History 1995 to 2021, in 1998, 38% of graduates and 18% of lecturers were female, although only 2% were professors – a number that by 2017, had risen to 11%.

Both Frances’ and Caroline’s stories, of forging academic careers at a similar time and facing similar obstacles, mark them out as real pioneers. Female mathematicians were still something of a rarity and it was easy to feel isolated. According to Caroline, “It was gritty determination that saw me through.” That said, they are both very optimistic about the future for young women mathematicians.

Talking about the changing approach to maths today, Frances says, “One thing that can be done by universities – and probably has been happening more at school level – is getting students to do more project work, and dissertation-style work, rather than just the standard exams, as this encourages collaboration amongst students. Collaboration is the key here, and it is becoming far more important in maths research these days. A collaborative, continuous learning way of working is debunking the historical ideas of ‘youthful brilliance’ and ‘the individual genius’ that have been so much part of maths folklore.”

With this, and as the world becomes more and more dependent on technology, they both point to the extensive and ever-expanding opportunities for mathematicians in both the scientific and commercial worlds. On this, Caroline says, “Maths graduates are one of the most employable groups from the University of Warwick, and the choice of careers that they can go into now is vast – from accountancy, banking and actuarial services to engineering, healthcare and climate science, all the way through to AI, data science and advertising.”

To get a feel for this, we spoke to South Hampstead High School alumna, Sophie Newton. A graduate of University of Oxford and, coincidentally, a former pupil of Dame Frances Kirwan, Sophie is an entrepreneur, consultant, business coach and former COO of digital advertising agency, Brainlabs. At only 23, she oversaw the business from its start-up of four people working in a basement to an established agency employing more than 250 staff, in just seven years.

“Online advertising is very data-driven and every interaction is tracked and recorded so there are literally trillions of data points,” she says. “As Google and Facebook started online advertising, traditional agencies weren’t geared up for the maths challenge.” Sophie brought the mathematical know-how to Brainlabs, which gave it a unique edge in a fast-developing market. As she puts it, “We were able to show clients why the maths was so important. Effectively, it meant that client management became data management.”

As to how a maths degree serves people, she says, “I did probably around 1,000 interviews at Brainlabs, and maths students had a rigour that really stood out. Employers want to see people who like a challenge, can break down a problem and work it through, can grasp abstract ideas and convey complex ideas in simple language.”

So what is the future for girls in maths? Well, anything, it turns out. Frances, Caroline and Sophie are all passionate about their subject, and agree that the opportunities – especially now in the technology and data-driven commercial world – are enormous. The qualities that a maths candidate has are unique, and to girls thinking of studying maths at university, they all advise, “Go for it”.