Welsh hockey player Sarah Jones is an alumna of Howell’s School, Llandaff in Cardiff, and is a mainstay of the GB hockey team. We managed to catch up with her just a few short weeks after her return from the Tokyo Olympic Games. 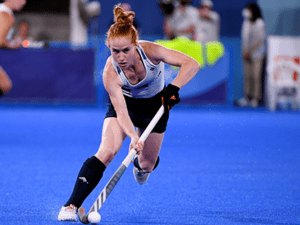 Sarah Jones returned to Howell’s one bright chilly morning to chat to students from Reception to Year 13, and to show off her hard-won Olympic medal. Behind us as we talked, a group of 7 and 8-year-old girls were having their first introduction to hockey, and Sarah couldn’t resist breaking off from answering our questions to show them how to move the ball steadily along the ground, adjusting their hands on their sticks and encouraging them with cheers as they picked up their pace.

When Sarah joined Howell’s she was football-mad, and had never seen hockey being played. We asked her when she first picked up a stick:

“I played football all day every day; it was all I ever thought about. But it got to the stage where I wasn’t allowed to play with boys anymore, and football for girls wasn’t really a thing then. When I got to Howell’s I started playing hockey and lacrosse. I love team sports, but I’m not very tall so I wasn’t very good at lacrosse. Hockey has a lot of similarities to football; they only got rid of the offside rule in hockey just before I started playing. I could watch hockey matches, and see so many similarities with football. So after the first few weeks I was hooked.”

“I love the look on a child’s face when they look at the medal and when they hold it.”

While she was still at school Sarah represented Howell’s in the GDST tournaments and joined a hockey tour to the Netherlands, where the power and style of the Dutch players gave her a taste of the game played at the highest level. Having represented Wales for the under 16 and under 18 squads, Sarah went to Loughborough University, where she studied Geography and Sports Management and continued to play hockey, starting by playing for the 3rd team and moving through to the 1st.

As a student at Loughborough University, she began to consider the possibility of a career as a professional sportswoman, continued to play for Wales and set her sights on being selected for the Team GB development squad, the stepping stone to selection for the Olympic squad. She explains:

“I looked at the people around me and I was like, ‘They’re better than me. But I can see how I can get there.’ I saw people around me getting opportunities to play for England, and to do GB development training. That felt like the next thing I needed to do. I never really admitted it to anyone. I definitely didn’t say it out loud.” 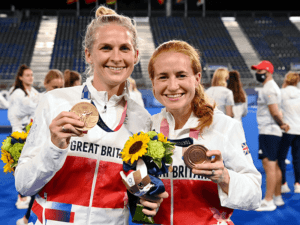 After graduation, Sarah moved to London and began working for British Tennis, continuing to play hockey. The GB development squad came calling, and in May 2021 she heard the news: she had made it through the selection process and was officially a member of the Team GB squad heading to Tokyo for the Olympic Games. For all the athletes there was one last hurdle that they had to overcome: staying free from Covid-19 in the final few weeks. She explains,

“I don’t think I’ve ever been as paranoid about anything as I was about the PCR tests, especially before we went. We had to keep testing, testing, testing. The idea you’ve got that far and then you could test positive the day before flight and that would be it. There was even the rule that if someone on the plane three rows in front or three rows behind tested positive then you would have to quarantine, so that would be your Games over.”

Restrictions due to Covid mean that the stadiums and stands that are usually full of sports fans and spectators waving flags and cheering on their teams were almost empty. How does Sarah feel that impacted the games for the athletes themselves?

She says, “It was odd, because it was the Olympics, and you know the Olympics should have crowds. But equally, I play hockey, and at hockey games you often don’t have a crowd! I felt for the Japanese volunteers that were there; I would have really loved for them to have seen how great their country’s Olympics was. So I felt more sad for the Japanese public that they didn’t get to experience their games, than I actually missed it for us.”

The Tokyo 2020 were postponed to last summer thanks to the COVID-19 pandemic, which means that the next Olympics Games are only a little over two years away. Does Sarah think she will be in Paris for the 2024 Games?

“This is a shorter Olympic cycle than normal, only three years instead of four. So Paris is only two and a bit years away. I’d like to see if we can do one better—or two better—than we did at Tokyo. But I think the key thing is for me is that I still enjoy it, so if I’m still good enough and my body holds up, then yes, I’d like to give it another go!”

It was a complete joy seeing the students at Howell’s when Sarah arrived in her Team GB kit. For many of them it’s the first time they have ever had the chance to meet an Olympian in real life, and for the younger girls in particular it’s almost instinctive for them to reach out and touch the large bronze medal around her neck. What is the general public’s standard reaction when faced with an Olympic medal?

She laughs, and reminds us what we said when she passed the medal to us earlier in the morning.

“I don’t think it’s possible to hold the Olympic medal without saying ‘It’s really heavy!’ I love the look on a child’s face when they look at the medal and when they hold it, when they put it around their neck, when they have a photo. And it’s not just children; I went to my sister’s baby shower the other day even people who aren’t really interested in sport want to hold it and feel the gravitas. It’s my medal, but I won it for Great Britain. It’s nice to share it with people.”

Welsh hockey player Sarah Jones is an alumna of Howell’s School, Llandaff in Cardiff, and is a mainstay of the GB hockey team. Sarah made her international debut for Wales back in 2005, and was called into the GB cycle following the Rio 2016 Olympics. At the Tokyo 2020 Olympics she earned numerous plaudits for the skill and determination shown in each game as she helped the team win an emotional bronze medal.