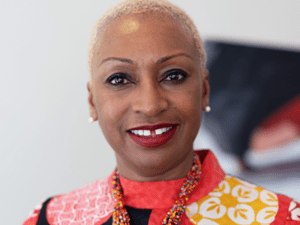 I started at Putney High School when I was 12, one term after everyone else in Year 7, so I was the only new girl that day. What I remember, apart from being the only black African girl in the entire school, and having a new rubber with “My Biggest Mistakes” printed on it – which I thought was really cool – was the incredibly warm welcome I got. Sarah, one of my closest friends today, invited me to sit next to her, and by the end of the week, I’d been invited to my first Putney High School class birthday party. It was quite a beginning.

“I think the school actively encouraged us to explore this melting pot of movements and emerging cultures.”

My Putney years, during the late 1970s and early 80s, were an exciting, important time in history when there was a lot happening, from the miners’ strike, to the Falklands war, to Margaret Thatcher’s government and the anti-apartheid movement. And I think the school actively encouraged us to explore this melting pot of movements and emerging cultures.

Reflecting a lot of what was happening societally, the 1970/80s was also an exciting time in music. I was into punk rock, and an avid fan of some of the leading punk bands of the time. At school, we pierced each other’s ears, tore holes in our clothes so that we could “fix” them with safety pins, dyed our hair purple and punked up our uniform as best we could. Other girls were skinheads or into Ska, but the point is, everyone was into something and identified with a movement somewhere.

I’d arrived at Putney very politically aware, even at the age of 12, and got involved with the anti-apartheid movement, which is how I met another of my great friends, Fran. Fran and I would go on anti-apartheid marches together and would get into trouble at school because of it. Not that Putney was against us supporting the anti-apartheid movement: they just didn’t appreciate us “defacing” school property by sticking our apartheid stickers on all the school lights. Predictably, the stickers melted, we were obviously the culprits, and were duly summoned to Miss Smith, the headmistress. I went into ‘lawyer’ mode, and argued that no-one could prove beyond all doubt that it was us, but Miss Smith was not convinced. Secretly, though, I think she quietly approved.

The school had lovely gardens, with lots of benches where we’d get together and chat. But I remember building works, too, as the old part of the school where my classroom was, was being refurbished. We were therefore moved to some pre-fab units which we hated, so en masse, the whole class just moved back into the old building. Our form teacher was horrified (she thought somehow we had all left the school grounds), and unsurprisingly, we got a whole-class detention for it.

“As a young black girl in a very academic environment, I was always hearing what I could do – never what I couldn’t.”

There was something very unique about my class. We were always supportive of each other, and although sometimes we were a bit uncontrollable, the school never split us up – they always kept us together. As if they recognised there was something a bit special here.

I was not the most academically gifted pupil: in fact, I wish I had done a little more studying. When I was at school, sport, and dance in particular, was my thing. I ended up as Captain of Dance at Putney, after I’d overcome my slight horror at the purple leotards, and with my friend and dance partner, Hannah, went on to win a number of competitions, which I loved. I keep the certificates on my study wall to this day, and have determinedly kept dance in my life.

As I look back on my Putney days, there are some things that seem very clear to me now. First is the quality of friends I made. Ruth, Peady, Hannah, Amanda, Sam, Sophie, Penelope, Helen, Fran and Sarah. They just make everything better by being there, and they keep me grounded. I feel it’s indicative of the great women that come out of Putney. Amazing friendships for life. And amazing women who go on to do amazing things in life.

Another is the academic grounding we got, along with encouragement to find non-academic pursuits too. As a young black girl in a very academic environment, I was always hearing what I could do – never what I couldn’t. This gives you not just the belief that you have a voice, and choices, but it gives you resilience too. School, I think, was like a sanctuary from the outside world for me – and something I’ve taken from it is to try and cut out the noise when I can. I was recently asked to give some advice to a friend’s daughter about Putney, and I said that instead of worrying about fitting in, she should think about whether she’ll like it. It worked for me, and I think generations later, it would still be the same today.

Prior to moving to the US, she had an illustrious career in the City, at HSBC Global Asset Management, HSBC Retail Banking and Wealth Management, and Barings. She is an Honorary Bencher of Middle Temple and was named one of the Upstanding 100 Leading Ethnic Minority Executives (2016), Top 20 Global General Counsel (2019) by the Financial Times, and was recognized as Britain’s 5th most influential person of African and African Caribbean heritage in 2018 by Powerlist. She also received a lifetime achievement award from the UK Black Solicitors Network (2016), and was named one of the Power 100 Women by City A.M. and 100 Women to Watch by Female FTSE Board.

As an ardent defender and champion for women empowerment, gender equality, and justice for all, she has received a host of awards and recognition for her accomplishments as a woman of colour who has blazed the trail and her commitment to mentoring young women and advancing the rights of women and girls globally. With this, she has recently been appointed inaugural Chair of the Women of the World – WOW Foundation – a UK charity that believes a gender equal world is desirable, possible and urgently required.