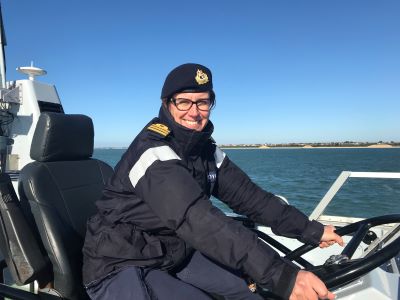 Captain Maryla Ingham has taken command of HMS Protector – the Royal Navy’s only Ice Patrol Ship, making history by becoming the first woman to hold the rank of Captain and command a major ship unit in the Royal Navy.

Maryla is a Sutton High School alumna who read Law at UCL before joining the Royal Navy in 1999. She started her career in HMS CAMPBELTOWN off the coast of Somalia as part of Operation Enduring Freedom following the September 11 attacks in 2001. She later became Commanding Officer of HMS BROCKLESBY, a HUNT Class Minesweeper; the only female Commanding Officer among the 19 offshore patrol and mine-sweeping vessels in the Royal Navy at that time. She has taken charge of the 5,000-ton HMS Protector with its crew of 77 men and women, with immediate effect.

She consistently breaks barriers in her career, and we couldn’t be prouder. Keep up the good work Maryla!