Samira Ahmed, winner of the GDST Alumna of the Year award and alumna of Wimbledon High School, talks about challenging authority and doing the right thing 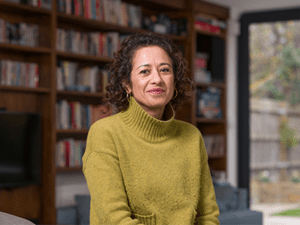 Samira Ahmed, multi-award-winning journalist, writer and broadcaster, has a near picture perfect memory. From a video call in her home office, she recalls her school days in vivid detail, from the Wimbledon High School junior entrance test to the clock in the LIIC classroom, loving Carbonel, loathing The Borrowers and describing The Lion, the Witch and the Wardrobe as “transformative”.

In fact, Samira is clear about a lot of things – from her school experiences and how they shaped her, to knowing from a very young age what her calling would be, and the unshakeable values and beliefs that she’ll go into battle for. The way that she articulates everything is equally clear. The only minor blip in all of this was for an essay assignment during the Silver Jubilee year in 1977, when she predicted that she’d be a doctor living in St Albans with 7-year old twins by the 2002 Golden Jubilee.

“Standing up for what’s right is always a good idea.”

By the time she was heading into senior school, Samira knew that journalism would be her future. She tells of the time when, at around the age of 13, she was (wrongly) sent to the headmistress for a misdemeanour and knew this wasn’t right. But, she says, “You couldn’t challenge. The headmistress wasn’t going to listen and I knew I was just going to have to suck it up.” She continues, “I wasn’t cowed. I took it away and realised that I don’t instinctively have this idea that I have to obey authority – I knew that truth was more important than authority.” She believes, “I think you should challenge the official version more”, and adds, “Standing up for what’s right is always a good idea.”

Beyond Wimbledon High School, and the “fantastic” experiences she had there, her life at home, while sheltered in some ways, also exposed her to an exciting mix of culture and talent. Having arrived in Britain in 1961, Samira’s mother worked in the Asian Programming Unit at the BBC. “I saw my mother,” she says, “a university graduate, trained dancer and natural artist and her wonderful friends who were all musicians and artists and political journalists. I used to hang out with them at Bush House and hear them talk.” She describes these friends coming to parties at the family home, with live musical concerts played by Indian sitarists and other professional musicians often going on into the small hours. “So,” she says, “I grew up with a very sophisticated cultural home life.” She recognises the importance of seeing people from all backgrounds working at the BBC and of understanding how “what you see is possible”.

Fast forward through an English degree at the University of Oxford, a post-graduate diploma in journalism from City University, London and a highly-prized place on the BBC News trainee programme, and Samira Ahmed is now a household name. Her by-line has appeared in countless newspapers and magazines, including The Guardian and The New Statesman, along with a host of TV and radio news programmes including Radio 4’s Today and Front Row programmes, documentaries for Radio 3 and BBC Four (if you haven’t seen Art of Persia, you can find it on BBC iPlayer) and for BBC1, Newsnight, Sunday Morning Live and Newswatch, to name just a few.

But it was Newswatch that really forced Samira into the spotlight to defend her sense of what is right, when in January 2020, to use her words, she ‘became the news’ by winning a landmark sex discrimination employment tribunal against the BBC for equal pay on Newswatch. Echoes of her 13-year old self are there when she explains, “I was willing to lose, but I knew I wasn’t going to take it anymore.” She’d been researching Martin Luther King, and reasoned, “When you look at the American civil rights movement, and how great the dangers were, in comparison to that, what excuses did I have for not standing up?”

It’s a thread that runs through much of what she does. And so it’s no surprise that amongst the people she admires the most are the ground-breakers that have stood up for the right thing. She cites her mother first, as not only as an actor and pioneer in broadcasting, but as someone who pushed and encouraged her throughout her childhood. Theresa May, whose calls for gender pay gap reporting triggered Samira’s own action for equal pay on Newswatch, and Harriet Harman, with her cross-party collaborations on equality also make the list. “Two MPs”, she says, “on different sides of the House who have always thought about the bigger picture, about how to change the system so that everyone (not just the pushiest) can flourish.”

“Be careful about thinking that unless you agree with someone on everything that you can’t agree with them on anything.”

To this point, she adds, “Be careful about thinking that unless you agree with someone on everything that you can’t agree with them on anything. You sometimes need to make strategic alliances on certain issues, especially around women’s equality.” And to younger women and girls coming up behind her, she says, “Work as allies, join unions, recognise the achievements of older women who’ve gone before, and involve men.”

But the note she finishes on, with characteristic clarity, is this. “I love my job,” she says, simply. “I’ve been doing it for 30 years, and I have no plans to give it up any time soon. It’s a joy, and Wimbledon gave me the education to do what I genuinely love. Who could ask for more than that?”